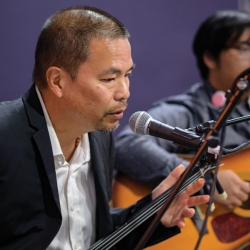 Photography was provided by: Scott Tsuchitani

Professor Uenten is a third-generation Okinawan born and raised in Hawai’i. His interest in his Okinawan background and in Ethnic Studies led him to spend over 10 years living in Okinawa and Japan. His Ethnic Studies background helped him form a critical analysis of how Okinawan culture and identity were formed in the context of both Japan and the U.S.’s racist colonial domination over Okinawa. As such, he feels privileged and proud to be part of the AAS Department and College of Ethnic Studies at SF State as well as excited over working learning from his colleagues in Critical Pacific Island and Oceania Studies!

Professor Uenten is currently on a Fulbright fellowship to teach and do research at Meio University in Nago, Okinawa. His research is on a particular song that his maternal grandmother brought to Hawai’i as an immigrant. It was in the privacy of home because of the discrimination against Okinawans within the Japanese immigrant community. His mother did not learn to sing the song because of the shame associated with it, but shared its meaning and emotion with him. Having been inspired by the movements that culminated in Ethnic Studies courses that he took in young adulthood, he learned to sing and perform the song. In the meantime, with the appropriation and commodification of Okinawan culture by Japan from the 1990s in a way that is similar to how culture of people of color in the U.S. is appropriated and commodified, the song has left the privacy of Okinawan circles to being a public representation of Okinawan-ness. It has also become a symbol of Okinawan-ness for diasporic Okinawans in South and North America, Hawai’i, and other parts of the world.

This project is an ongoing one and he has interviewed Okinawans in Hawai’i and California about this song and how it is taught, learned, performed, and interpreted. While in Okinawa, he will continue to interview Okinawans (including many South American Okinawans who have returned here to work and study) about the song.