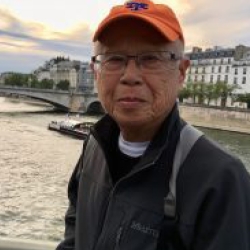 To address this situation, Jeff and his primary partners in crime - Frank Chin, Lawson Fusao Inada, and Shawn Wong - set out to find as many writings by Asian American authors as they could discover, published or not. They pressured publishers to reissue or republish works by people like Louis Chu, Toshiro Mori, John Okada, and Carlos Bulosan. They sought funding for the publication of new works by contemporary Asian American poets and writers and produced their own landmark book Aiiieeeee: An Anthology of Asian-American Writers. The publications of every Asian American author since is based on the foundations they built.

Their efforts also led to the Combined Asian-American Resources Project (CARP) - which sought to gather information not only on Asian American writers but on Asian American cultures in general. This sometimes mad-cap enterprise sought primary sources, recorded events like Bomb Day in Marysville, and interviewed people as varied as early Asian Americans engaged in Hollywood and the arts, and an elderly hom-yu (salt fish) maker in Monterey, and a long-established woman barber in Oakland Chinatown. Jeff, in particular, took great joy in discovering the subtleties of Chinese American English and the broad range of Asian American cultural expressions.

His role in building and defending Asian American Studies at SF State is equally important. He drove the development of coursework related to Asian American literature and creative writing while helping to direct the larger creation of Asian American Studies at San Francisco State. Equally important, Jeff held the chairperson’s position for many of the most difficult periods, during which he courageously often faced the open hostility of the campus administration and larger campus anti-Ethnic Studies belligerence. He addressed and often resolved conflicting concerns of the highly involved students, community members, and faculty who were engaged in the construction and operation of the department. An essentially calm and gentle person with a wry wit and ever the diplomat, he was an adept consensus builder who brokered collective agreements over issues that might have otherwise jeopardized departmental unity, integrity, and even survival. He earned the respect and admiration of his colleagues in Asian American Studies, Ethnic Studies, and the larger campus community, and among the leading writers and artists of color, building lasting alliances and highly valued friendships along the way.