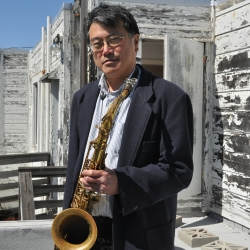 Photography was provided by: Leon Sun

Wong has a 45+ year history in student and community activism, beginning in the Asian American Movement of the 1970s and 80s. He is known for his contributions to community-based arts that share the stories and perspectives of Asian Americans.

Francis Wong was honored as the Distinguished Graduate Student in Asian American Studies at the Graduate Student recognition ceremony on Wednesday May 25, 2016.  Francis was honored for his academic excellence and for his artistic and community practice in the Asian American community. As an award-winning saxophonist, composer, and music director, while in graduate school he  directed and recorded musical scores for Lenora Lee’s immersive dance theater works “The Detached” and “Rescued: NY Stories” (2014) which dealt with the issue of human trafficking and “Fire of Freedom” (2015) which dealt with issues of war, trauma, and women’s experience. He also released a CD of new work entitled “Needs Are Met” in collaboration with legendary saxophonist Ari Brown and veteran bassist Tatsu Aoki in Chicago.

Through his artistic talents, Francis has  supported several Asian American non-profit arts and culture organizations including the following organizations and/or events: