Spring semester begins Jan. 24 with primarily remote instruction. Most face-to-face instruction will begin on Feb. 14. Read the latest on the Campus Comeback website. 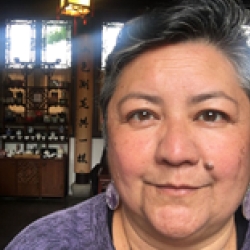 My name is Wei Ming Dariotis, and although I am comfortable being addressed as Wei Ming by colleagues in informal settings, my late colleague and friend, Dr. Dawn Mabalon, taught me that as a woman of color I am an aspirational role model for other women and feminine identified people and thus I should claim my title: so, my preferred form of address by colleagues in formal settings is Dr. Dariotis (i.e, in any situation in which  you would use the formal title of a white man, please use mine). I am a full professor — which makes me one of the only 2% of full professors across the nation who are asian American women — of Asian American Studies, affiliate faculty with the Educational Leadership Doctoral program, and faculty director of CEETL, the Center for Equity and Excellence in Teaching and Learning at San Francisco State University. I identify as a Chinese-Greek-Swedish cis-gender bisexual/queer woman. Born in Australia, I was raised in San Francisco. I currently live and labor on the unceded/unyielded territory and traditional home of the Ramaytush Ohlone people, whose work and creativity in shaping this land, and its plants and animals for 15,000 years impacts me and my family daily. We—a Black, Asian American, European American, American Indian, mixed race family—live in San Francisco’s Bayview District, because it is one of the last places of refuge for the 5.2% of San Franciscans who are Black.  Living here, we recognize the deep segregation of this City due to histories of redlining and current forced shifting of populations.  I appreciate this Indigenous tradition of land acknowledgements, which non-Indigenous people have been being requested to honor for hundreds of years, because I am as ashamed of not having known, as a child, the names of the Ohlone peoples, as I am of having teased my Chinese mother for her inability to say words like "Palo Alto." I use the pronouns she/her and the Chinese gender-neutral pronoun ta — despite my imposter syndrome as someone who only studies Chinese — as a way of reclaiming the mother tongue I once rejected.

Wei Ming Dariotis is Faculty Director of the Center for Equity and Excellence in Teaching and Learning, Professor of Asian American Studies, and affiliate faculty of the Educational Leadership Doctoral Program at San Francisco State University. With Laura Kina and Camilla Fojas, she coordinated the Inaugural Critical Mixed Race Studies Conference (DePaul University, 2010), and co-founded the Journal of Critical Mixed Race Studies.

As the lead developer of the Justice, Equity, Diversity, and Inclusion in Pedagogies of Inclusive Excellence (JEDI PIE) Institute, Dr. Dariotis has emerged as a leader in anti-racist pedagogy at SF State, for which she consults widely across campus. In her role as Faculty Director of CEETL, Dr. Dariotis co-coordinated the annual Faculty Retreat on the themes of “How to Be an Anti-Racist University” (2020) and “To Serve the People: Pedagogies for the City’s University” (2019). Her anthology (co-edited with Kieu Linh Valverde), Fight the Tower: Asian American Women Scholars’ Resistance and Renewal in the Academy (Rutgers University Press, 2020) illuminates the role and resistance of Asian American women in academia.

Asian American Culture and the Arts